BY TERRI WU | The Epoch Times

Cryptocurrency enthusiasts not only lost money they had approved for a presale transaction, but also lost all the money in their Trust Wallet over this past weekend, through a deception that gave scammers access to their entire wallet, according to people who claimed to have been affected.

The victims, who may number in the hundreds, invested in efarms, a new cryptocurrency launched by elonfarms, which operated with a Twitter account (@elonfarms), a website (elonfarms.finance), and a Telegram group (ElonFarms). All these accounts have been either deleted or deactivated. Elon Musk isn’t known to be involved in the elonfarms cryptocurrency.

Investors thought they approved a transaction fee to claim the presale efarms coins after the presale ended at midnight of April 23, yet lost all their tokens in their digital wallet Trust Wallet. They found out that the contract they accepted allowed elonfarms access to their entire Trust Wallet rather than the amount they committed. Many lost all their digital assets as a result.

Victims formed a Telegram group, “ElonFarmsRugPool,” on April 24 to discuss the next steps. The group accumulated nearly 500 members in two days. Some tracked where the balance of various accounts their tokens were moved to.

One account had a balance of over $240 million, and another had over $30 million. These accounts have since been cleared to $0. In the crypto world, all accounts and transactions are public information; however, the account owners are anonymous. The number of people affected is unclear. Before the presale ended, elonfarms had attracted $725,000 in investments. According to one victim, who goes by the pseudonym of “Mr. Ray,” there were over 3,000 investors in the Telegram group “ElonFarms.” 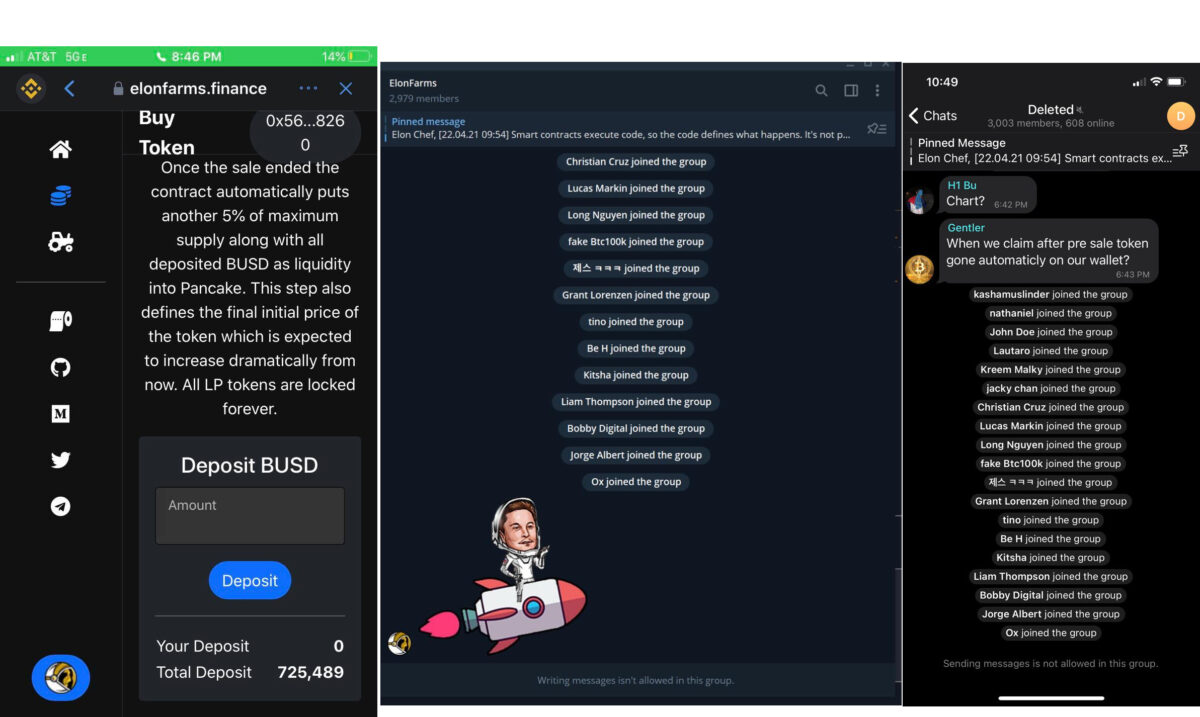 Caption: from left to right: a screenshot shared by Mr. Ray shows the total deposit of $725,489 shortly before the presale ended. Another screenshot shows 2,979 members in the ElonFarms Telegram group. After the presale and token losses, more joined the group, but the owner and self-claimed ElonFarms CEO ElonChef has closed out the group and sent a meme to everyone. The far-right screenshot shows the last question raised before the ElonFarms Telegram group was deleted. (Courtesy of Mr. Ray)

Mr. Ray lives in the midwestern United States and is a pipeline worker in his mid-20s. He has been investing in cryptocurrencies to help with family finances since pipeline jobs dwindled earlier this year. He grew an initial investment of $600 to $6,600.

He said he was excited and stayed up late to claim the tokens as soon as the presale ended on April 24, but didn’t receive any tokens. And, after an hour, he got a notification on his phone that his assets were transferred.

“I just couldn’t believe it!” said Mr. Ray. His first reaction was “no, no, no.” All he saw on his end was to approve the transfer fee to receive the presale tokens worth $300. Yet, he lost all the tokens he had in his Trust Wallet, a cryptocurrency wallet product that held all his digital assets.

“The $6,000 could have helped buy me time until the pipeline settles out. Any bit helps in these troubling times,” he said.

“It was a source of pride to be able to show my wife our gains and let her know that even though I can’t work right now, I’m still making steps in the right direction for our future. To be set back months of effort was just really hard on me, mentally at that moment,” he shared with The Epoch Times. “I have come to terms with the loss. I hope those responsible for hurting so many people get their fair shares.”

He didn’t report the incident to the police, but has been collecting information to provide tips to the FBI.

‘Catch Them and Put Them in Jail’

Another investor who goes by the Telegram screenname of “Mr. Crypto” didn’t buy the presale coins but invested $100 in one of the farms associated with the elonfarms coin launch to receive an interest payment for his investment. He accepted the contract and confirmed the investment.

A few days later, shortly after 11 p.m. Eastern time on April 23, he was watching TV and got a notification from Trust Wallet that $67,400 was sent. He said he checked the transaction details and realized that the elonfarms contract creator had migrated his tokens from his wallet to another.

“That’s when I knew that I was scammed.” He immediately revoked all permissions to his wallet to prevent further losses.

“I know how these things are, and you can never recover the money. It sucks. I’ll make it back.” Mr. Crypto, a 34-year-old Canadian commercial real estate developer and software developer who has invested in cryptocurrencies since 2017. He said he wouldn’t use Trust Wallet again. 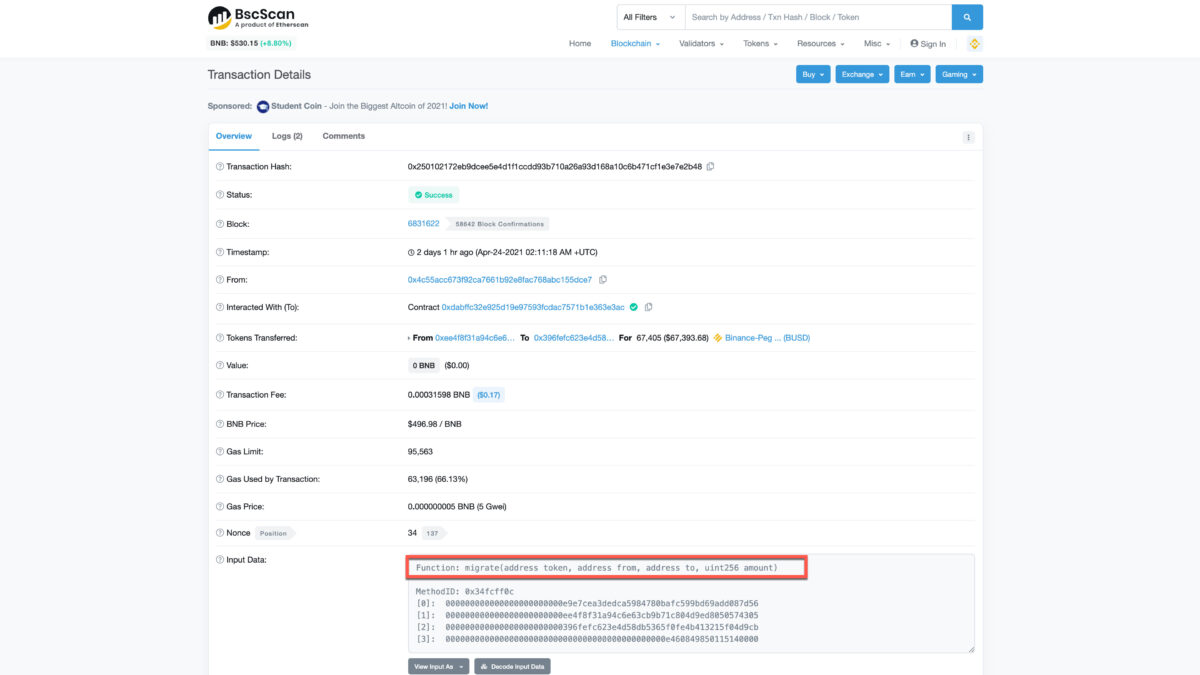 By reviewing the details of the $67,400 transaction, Mr. Crypto realized that the elonfarms contract gave the contract creator access to his funds, hence the execution of the “migrate” function in the details. (Screenshot via The Epoch Times)

Mr. Crypto reported the scam on the Binance community board and the FBI Internet Crime Complaint Center.

“I don’t care so much about getting my money back as catching them and putting them in jail.”

FBI officials didn’t immediately respond to a request by The Epoch Times for comment.

Jon (a pseudonym), a Canadian and advertising professional in his late 30s, lost about $9,000. He took a look at the destination account that his tokens were migrated to and saw the account worth more than $240 million at one time.

He sent out the link to the account, and another member of the “ElonFarmsRugPool” Telegram group took the screenshot, which unfortunately doesn’t include the account address. However, Jon confirmed with The Epoch Times that the screenshot was from the account he shared with the group and that the current balance was $0.

He said he was aware of the risk; therefore, he only agreed to invest about $50 worth of tokens but lost $9,000 due to unauthorized access to his wallet. He said elonfarms was “theft.” It wasn’t just another crypto project that didn’t go anywhere after launch.

“I think it’s just unfortunate this scam happened here. It feeds into the narrative that people want to hear about cryptocurrency that it is just full of hackers on the web, or we’re just trying to steal stuff from you and use the funds to do illegal stuff, which isn’t true,” Jon added. 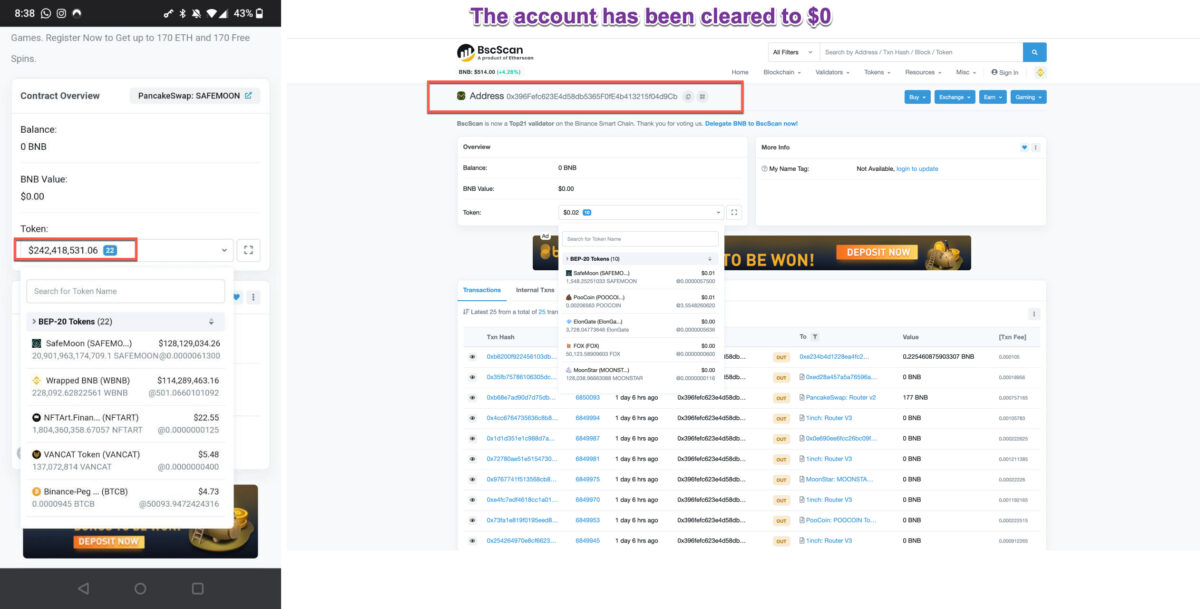 One account Jon lost his digital assets to showed over a $240 million balance at one point. It has since been cleared to $0. (Left screenshot courtesy of Mr. Ray; right screenshot via The Epoch Times)